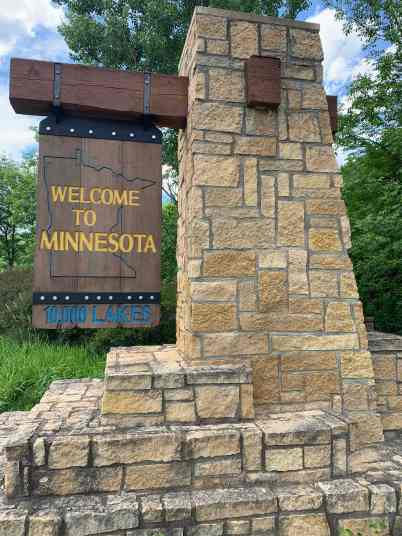 June 11 – I left the Hole in the Mountain county park campground in Lake Benton in the early morning in a steady rain.  It was one of those days when I might have cancelled the ride were it not for our timetable for meeting family in Minneapolis.  But, hey, I’m an experienced rain rider now, right?

The rain continued lightly through the morning as I headed down US 14 toward New Ulm for a ride expected to be about 100 miles.  About 31 miles into the ride, I came upon a detour due to road construction.  The state of Minnesota does a lot of road construction during the summer.  Stephanie, who grew up in Minneapolis, told me that Minnesotans know the two seasons here are winter and road construction.  Out here in the country, detours for a closed road can be really long, as the roads are laid out in a grid along the mile marks, and not all of them are paved.  So my detour today took me north by 6 miles to get me to the next eastbound paved road, and then 18 miles east before another 6 mile road south to reconnect to US 14.

Along the route the rain stopped.  The landscape had changed from the prairie of South Dakota into farmland.  The season’s wet spring had delayed planting, and many of the fields were still flooded.  Corn was just sprouting in the fields that had been planted, and we’ve been told the harvest will be later and smaller this year.  The pools of standing water were great for the insect population.  I had to keep pedaling to avoid the fly and gnat bites—next ride I’m using bug spray.

I got through the detour and back on US 14.  The state of Minnesota had graciously provided a narrow shoulder for the road, and proceeded to grind in rumble strips to wake up sleepy drivers drifting off the road.  So most of the way I was riding on the roadway.  But the road was lightly travelled, and the trucks passing by were usually able to swing wide around me as they passed.  This changed after I passed through the town of Sleepy Eye.  From Sleepy Eye to New Ulm, traffic was heavy, so I did my best to stay on the narrow strip of paved shoulder available.  Thanks to the drivers – they all saw me and passed safely.

It was almost sundown when I rolled into New Ulm at mile 110 (with 15 miles of detour) and through the town to our hotel for the night.  New Ulm is a city originally settled by German immigrants, and it seriously works at retaining the old German style in its architecture and culture.  For you Californians, you might compare it to Solvang’s Danish style. 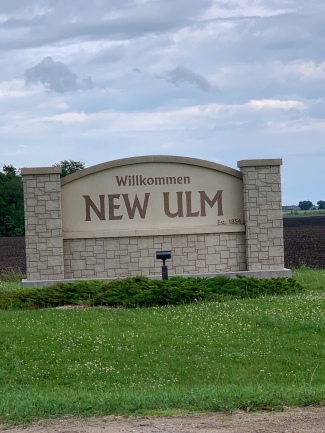 June 12 – Today was supposed to be a 92 mile ride into Minneapolis.  But there were strong headwinds all day.  The state of Minnesota also provided another road construction detour adding over 20 unexpected miles to the ride.  Stephanie waited patiently for me to arrive in Gaylord for lunch as my speed dropped through the headwind.  We have almost a week set aside as rest days in Minneapolis, so we decided I would use one of them to complete the rest of the ride into the city.  So I mounted my bike on the RV and we rode into Minneapolis to Stephanie’s mom’s house, agreeing to monitor the wind direction for a better day to do the final 70 miles into the Twin Cities.

June 14 – Minneapolis is Stephanie’s home town, so we planned for a long stay of about a week in the area to visit with her mother and her sister’s family.  So we expected that during our stay I’d have an opportunity to complete the ride into Minneapolis from Gaylord.

As hoped, the wind changed from northerly to southerly over the next two days, and I was able to cruise into the Twin Cities area from Gaylord.  For the first time in a thousand miles, I was coming into a large metropolitan area, with a fantastic bicycle trail network, cafes and coffee shops.

I was able to get recommendation of a good bike shop to get new tires for the gravel bike.  Farmstead Bike Shop was busy, but graciously installed the new tires.  I had a good conversation with the owner, Greg, who is a friend of my wife’s cousin Jim Kruzitski (who bicycles almost everywhere he goes, with his litlle dog Pippi in a handlebar bag.)  I told him about the ride across the country and he recounted trips others had taken, and we discussed William Least-Heat Moon’s book Blue Highways.  Moon told the stories of people who live in small towns across the country—the ones who live on the backroads.  I’d met a few of these people and gone through some of these towns as I crossed the prairie and farmland of the western US up to this point.  The benefit of travel, whether to other countries or to the small towns of America, is that there’s an opportunity to learn the perspectives of others.

Minnesota is the Land of Ten Thousand Lakes, and there are vacation cabins all over.  Brother-in-law Jim has one up near Pine City, so I was able to cruise the lake with him in the pontoon boat.

June 19 – Stephanie was staying an extra day in Minneapolis while I rode on to the next destination on my own.  I would stay in a hotel and carry what I needed for the night and the next day in panniers on my Bianchi bike.  I decided to carry my computer in the event I had good internet access at the hotel, which hadn’t been available for most of our ride since Missoula, Montana.  The extra weight of the loaded panniers was significant.  Going up hills took more effort, and the bike was slower and less maneuverable in general.  Another reason to be glad for having support from Stephanie for most of the ride.

Riding from Minneapolis to St. Paul means crossing the Mississippi River, which I considered to be the symbolic halfway point of my ride across the country. 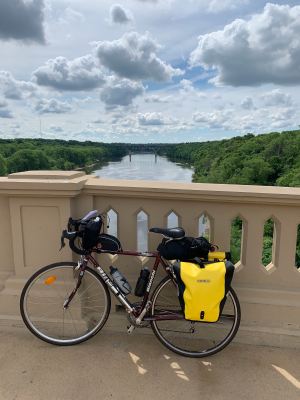 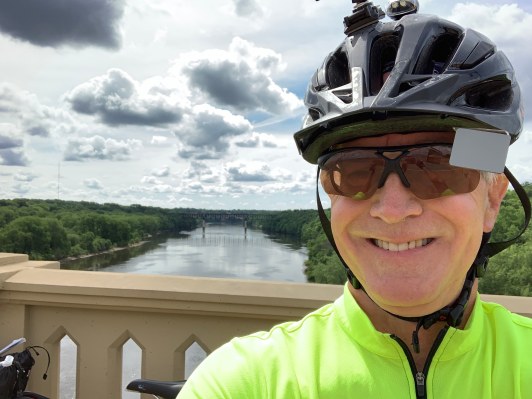 And I was there.

Much of the ride was on excellent bike trails.  Minneapolis and St. Paul have invested heavily in their parks and trails, and it’s easy to travel across the Twin Cities by bicycle.  Heading north, there are well-paved trails along old railroad lines, which are practically straight and pass through forests and small towns with very gentle grades.  The towns along the way have seen these bike paths as opportunities for park development, with the occasional cafes catering to trail walkers and riders. 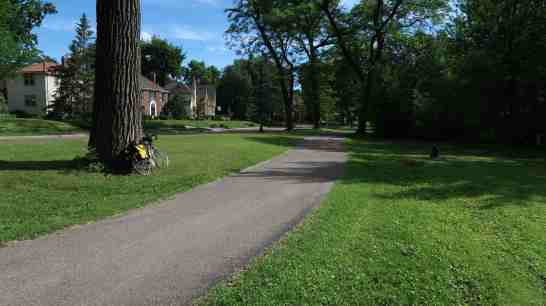 I pulled into St. Croix Falls early enough to get some photos uploaded for the blog, and used the hotel business center to print out my cue sheets for my rides coming up through the north lakes of Wisconsin.