July 25 – I took one rest day at Annie and Jeff’s house in Silver Spring.  Our original plan had been to make this a longer stay, to play with Jules and possibly scout the area a bit for places we might like to buy a house.  But with Stephanie recuperating in Richmond from hand surgery, I wanted to get down there as quickly as I could.  Jeff helped me work out the best route through DC onto the route through northern Virginia.  As it was not too far out of the way from his regular bicycle commute into work, he led me quickly through the streets of DC, almost to the Treasury building.  I had to document that I’d made it to Washington, DC, so I took a lap around the mall before heading to Virginia. 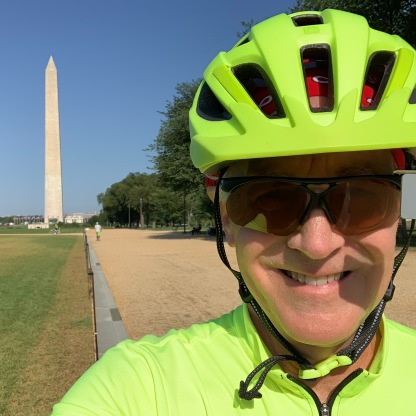 The route to Fredericksburg and on the Richmond is part of the National Bike Route System and also part of the Adventure Cycling Association’s Atlantic Coast route.  The route crosses the Potomac to Arlington and follows the popular route past Reagan National Airport and over paths and wooden bridges over swamp and marshland to Mount Vernon.  Then through the streets of Alexandria before taking a westward turn to go around federal land near the Quantico marine base.  Once around Quantico, the route cris-crosses Interstate 95 to Stafford and then into Fredericksburg.

It was a long day.  Over a hundred miles with steep rolling hllls that added up to about 4500 feet of climbing.  I finally got into Fredericksburg a little after 5 and headed straight for Carl’s Frozen Custard for a recovery ice cream before biking the last few miles to the Best Western for the night.

July 26 – I didn’t get out of the Best Western as early as I’d like.  I lost about an hour trying to print my route sheet in their “business center”.  In these 2-star hotels, the printers are not very reliable, and I needed the manager to come rework the cables.  So my focus on the ride today was to try to make time up so I could get to Richmond and my family as early in the afternoon as possible.

And I made good time on this ride.  Mostly gentle rolling hills through historic civil war country.  There were roads travelled by the regiments with, markers all over about troop movements, including the route that Stonewall Jackson apparently took in an ambulance after being wounded in battle.

August 3 –  I hadn’t planned to get as far as Richmond as early as I did.  I’d hoped to spend more time with Stephanie exploring Ohio and Pennsylvania, and seeing the sights along the way.  The plan changed with her fall, though, so that I could rejoin her as soon as possible in Richmond to be with her as she recovered.  We didn’t plan to be in Virginia Beach until August 4, so I spent the week in Richmond at brother Bob’s house.  During the week, there was work to be done on the camper, we saw Stephanie’s physical therapist, I got in a training ride around Richmond, and we packed up the camper for the week at the beach.

On Saturday, everyone headed down to Virginia Beach.  Stephanie, Bob and Carol drove down in a car and the camper.  Others would come from Richmond, Charlottesville, Washington, and Seattle.  I packed a pannier for the bike ride, with an overnight near Williamsburg, with a plan to meet them all for the end of the Excellent Adventure on Sunday.

The ride to Williamsburg was almost entirely on the Virginia Capital Trail, which is a very popular trail that fairly closely follows country roads near the James River to historic Williamsburg.  Near Richmond, the trail runs past a large boathouse for crew racing and lessons.  Today there was a big event happening, with young families and strollers along a portion of the trail and beginning rowers in several boats on the  water.   Once beyond the traffic of Richmond, the trail was uninterrupted the rest of the way.

The day became hot and humid early in the day.  With temperatures in the 90’s most of the day, I was very conscious of drinking fluids often.  I refilled and cooled off at a Dairy Queen along the way.  There was also an enterprising guy beside the trail by a cornfield selling popsicles and cold water from a cooler, and we had a good talk about how selling popsicles fills a niche, but not a very lucrative one.

I didn’t pass through Williamsburg, but turned toward (historic) Jamestown to catch the ferry across the James River to Surry, where I would stay the night.  Jamestown, the site of the first English settlement in America, is a tourist spot with a re-creation of what the village may have looked like.  Of course, there is nothing left of the original settlement.  It was made of wood 400 years ago.

My accommodations for the night were in one of 4 efficiency suites above the Surry Seafood Company.  If you ever get near Surry, stop here for dinner.  The view over the inlet is beautiful, and the seafood is first rate.

August 4 –  I began the last day of the Excellent Adventure early in the morning on Sunday.  The day started reasonably cool as I pedaled up the hill out of the Surry Seafood Company to the road that would take me through swamps and farmland and eventually through Norfolk and Virginia Beach to Sandbridge.

I rolled into the town of Smithfield (apparently famous for its ham, but I didn’t see a packing house anywhere).  There is a cute main street with a lovely brunch place that was open, so I parked my bike and had a very nice breakfast, feeling somewhat out of place as a sweaty bicyclist in shorts and a helmet among people dressed up for brunch after church.  But the staff treated me well.

The roads became busier and busier as I approached Norfolk.  The only way to get across the many rivers and inlets is over a few busy bridges, some of which did not have great bike lanes.  I’ve learned on this trip that on busy bridges like this it’s best just to take a lane and let the traffic slow down behind you, and pedal as hard as you can to get to the other side.  On one of the bridges, my rear tire went flat, so I had to ride on the flat to the other side until I could find a spot to change it.  As I was changing my tire, a frantic message came over my phone from my brother, “Are you OK?”.  He was following me on the RoadID GPS app, which had me stopped in the middle of the road, so he thought I was dead being scraped off the road by the fire department.  No, just changing a tire.

The route took me through industrial parts of Norfolk and into the sprawl of Virginia Beach.  We’ve done this beach vacation in Sandbridge for several years now, so when I got to Indian River Road I knew I was almost done with the ride.   I realized that I would soon be at the Atlantic Ocean.  I wondered what my reaction would be to having completed the Adventure, and thought about the people who had helped me along the way.  I made the turn at the north end of Sandbridge to head down Sandpiper Road to the house we had rented for the week, about 3 miles south.  Left on Kabler, right on Sandfiddler.  Two blocks down, I saw a group of people in the middle of the road.  My family had turned out to celebrate the end of ride with me!.  My brother’s grandkids lined up to give me high-fives as I rolled in.

I got off my bike, hot and sweaty from the ride.  Stephanie and I had an emotional embrace.  The ride that had dominated our lives for months was now over.  She had been my support, and had done so much work to support my dream.  She had worried about me all day every day as I rode alone, through cold and heat, rain and snow and wind, through busy city streets and areas with no cell service and no way to know where I was and no way for me to contact her.  Now it was done.  Maybe we could now relax. 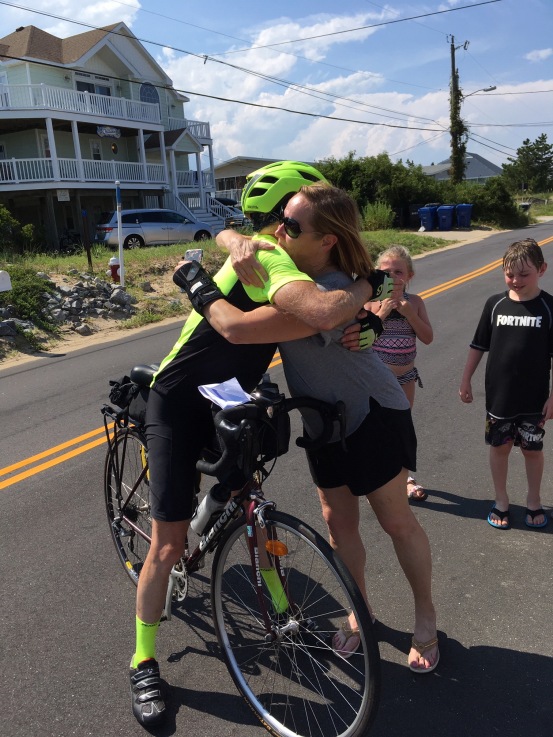 But there was one more thing to do.  The ride was from the Pacific Ocean to the Atlantic Ocean, and I had to go the last few yards from the road across the sand to the water.  The family followed me to the shoreline where I dipped the wheel in the Atlantic water, and lifted the bike over my head as the final moment of the Adventure.  Nora and Zac, who were with us at the beginning in Oregon, were there.  Annie and Jeff and Jules, who had travelled with me from Piittsburgh through the Allegheny Mountains, were there.  Bob and Carol, who cared for Stephanie and took care of driving the RV from Chicago to Pittsburgh and on to Richmond and Virginia Beach, were there.  Rosie, our dog, was there, perhaps finally happy that she may finally have a permanent home again and would no longer be uprooted daily to move to a new campsite or hotel. And the rest of our family joined in the celebration, with champagne and laughter. 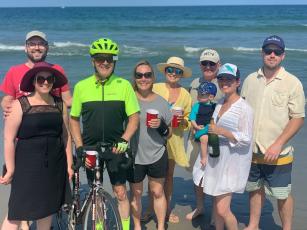 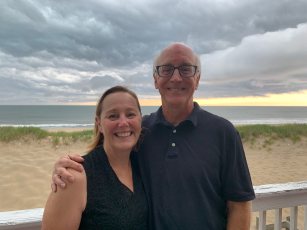